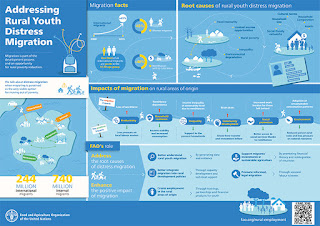 The UN Food and Agricultural Organisation (FAO) recently published an infographic on distress migration with the rationale that:

“Migrants are a potential resource for agriculture and rural development as well as poverty reduction in their areas of origin. However, distress migration of rural youth can result in the loss of an important share of the most vital and dynamic part of the workforce, with obvious consequences for agricultural productivity. This infographic describes the root causes of rural youth distress migration and how out-migration and remittances can contribute to rural development, poverty reduction and food security.”

Predictably this has led to tweets such as “Distress #migration of youth saps agric workforce & undermines food security”; “Agriculture #RuralDevelopment can help #DistressMigration” which can easily be read to mean that migration by those who come from poor families is a problem and agriculture is always adversely affected by young people’s migration.

There are several problems with the rationale presented in the infographic:

1. Young people migrate for both economic and non-economic reasons. In the graphic the causes for distress migration of youth are identified as food insecurity, poverty etc. These may well be the proximate economic causes but inextricably bound up with these are other aspirational causes such as wanting to become an urban person and changing one’s identity; wanting to move away from traditional norms and cultural restrictions on behaviour and life choices.  Our research on migration from chronically poor areas illustrates the complexity of the migration decision calling into question simplistic categories such as distress migrants. For example boys and girls in Ethiopia migrated for a variety of reasons including the desire to continue with higher education, adopt urban lifestyles, escape early marriage and save money of their own to start a business and move away from farming.

2. The situation described is based on cross-sectional analysis, frozen in one point in time. As such it does not consider how the situation of migrants and their social and economic position might change over time. An approach grounded in the analysis of the temporality of migration drivers and outcomes would show how migration is incorporated into the life course of individuals and households and how short term deprivation and hardship may be traded against social and economic repositioning in the longer term. Emerging findings from our research in Ghana and Bangladesh on the migration of young people from poor households shows the transformative potential of migration over time.

3. An underlying assumption seems to be that reducing poverty at source can reduce migration. But we know from experience that this is not the case at all and in fact migration tends to increase with improved access to resources as both Skeldon and Martin have demonstrated years ago.

4. The experience of rural employment programmes in reducing migration is mixed. It cannot be assumed that creating jobs in rural areas will reduce migration. We need to ask what kind of jobs are being created and whether these are in sync with young people’s vision of who they want to be?

5.  People in remittances receiving households withdraw from work but this doesn't necessarily indicate an unhealthy dependence on remittances.  As has been argued by Clemens, instead it could mean that those left behind no longer have to work in degrading and demeaning occupations.

6. It is not clear whether the negative impacts of “distress migration” shown in the infographic are based on empirical evidence or whether they are  purely hypothetical based on old theories such as lost labour theory. The migration of young people from labour surplus situations or large households may not have such consequences. Even in households where other able bodied adults are not present, there may be community or kinship based systems of sharing labour.