“You have succeeded!” Nigerian migrant churches in China 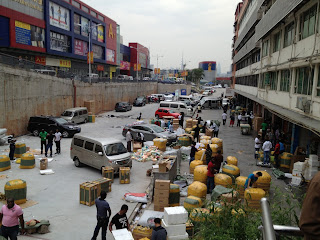 
“You shall be a global citizen of supernatural power!” the Nigerian pastor promised his congregants. “No matter where you are in your life this morning, there is divine increase and expansion coming up”. The crowd cheered him on, and the band started playing praise songs over his voice. Soon everyone was dancing. The scene could have been from a Sunday service in Nigeria but for the demographics:  A high number of young men betrayed that this was a migrant church.

In China because “Europe is closed”

The church was one of dozens African-run churches in the Southern Chinese city of Guangzhou, a center for Chinese production and export of manufactured goods. Nigerians have lived there since the mid-1990s. “Europe is closed,” some said to explain how they had ended up in China, a less desirable but more accessible alternative. Some Nigerians have made handsome money through exporting goods, providing logistics services, and helping people back home make purchases in China. However, many migrants lacked the capital and connections to succeed as entrepreneurs. They had come to China in the hope of finding employment, but discovered that there were no such opportunities.

Arriving in China on a business visas, Nigerian would-be factory workers soon faced a difficult choice: Return home before their visas expired or remain in China undocumented. If opting for the latter, they risked incarceration, fines, and repatriation when stopped by the police.  Yet they travelled for long distances to church on Sundays―by taxi if their funds allowed, but more commonly on public buses. What made these trips worthwhile? This question inspired my chapter in Hope and Uncertainty in Contemporary African Migration.

The topic of hope has been approached from two angles in the literature on African and migrant Pentecostalism. The first documents the ways in which religious engagement helps people to realize their migration projects. Pentecostal networks and theology have an instrumental value, these studies emphasize: They help people find ways to migrate and facilitate life abroad. Churches act as stabilizing forces that narrow the gaps between expectations and realities.

The second approach to hope and Pentecostalism takes rupture as its starting point. This scholarship refers to how individual desires for material wealth are intense but largely frustrated in Africa today. Charismatic pastors promise that prosperity is imminent for those who believe. Pentecostal churches emphasize immediate experience with God’s presence. Services are understood as unique events with performative power: They declare poverty dead and fortunes a fact of the present in the lives of the congregants.

As my ethnographic fieldwork in the Nigerian church proceeded, the weekly services started to feel repetitive. Every Sunday, a strong momentum was created to break with past misfortunes and pronounce that the desires that had inspired Nigerians to come to China were fulfilled. Yet, when I met people outside of church, nothing had improved: They were still hiding from the police and leaving phone calls from home unanswered because they had no money to send. I assessed the church services based their effectiveness in helping migrants attain their goals, and found them lacking. A reorientation was necessary to retain an open attitude. Here, I found Hirokazu Miyazaki’s (2006) The method of hope useful.

Miyazaki’s work points towards ways of studying discontinuity and maintaining the prospective orientation of hope. “The newness and freshness of the prospective moment that defines the moment as hopeful is lost as soon as hope is approached as the end point of a process,” he writes (p. 8). Instead of treating hope as a subject of knowledge, Miyazaki proposes hope as method for comprehending a future-oriented way of being in the world. Hopeful moments are ways of generating self-knowledge. Hope as method allows us to study Pentecostal practices on their own terms: The churches’ fantastic promises of wealth can be approached as a reality still in a state of not-yet. Prophesies can be appreciated for the social momentum that they produce rather than their efficacy.

Unconstrained  hope as an ideal

In the moral universe promulgated by Nigerian churches in Guangzhou, unconstrained hopes and desires for astonishing success were valued more highly than realistic aspirations for incremental improvements. The congregants understood bold prayer requests as signs of strong belief in God’s power.

African migrants passed the time by relaying stories about people who resolved tough problems in spectacular ways. Their accounts described audacious escapes from difficult situations that involved the police, customs officers, or immigration officials. Such narratives were also incorporated into the church services. For example, one pastor told the story of a migrant in China whose visa application was rejected by the British Embassy. The applicant had wept and said that he had no more hope left. The pastor had declared that the visa would be granted. Accompanied by cheers from the congregants, he described how the visa application eventually was successful:

The visa officer said ‘Why are you here?’ The man then replied ‘God said you must give me [a] visa’. The woman looked at him. ‘God has said I must give you [a] visa?’ she asked. He replied ‘Yes’. And then the woman told him ‘Come and collect your visa tomorrow!’ And he went and got the visa.

Similarly, migrants provided testimonies about being saved from deportation through supernatural intervention. A man became invisible when the police did passport checks in a trading mall. A woman was captured by the police, showed signs of violent illness, was released by scared police officers, and immediately recovered her health.

Generic promises of wealth and success made in plenary took on more concrete expressions as they were interpreted by the congregants. For example, a Kenyan woman, who lived from hand to mouth as a guide for visiting traders, planned to tap into global capital flows by buying vast amounts of land outside Nairobi and growing fresh strawberries to be airlifted to Europe. A Nigerian church member envisaged building schools that would serve as models for a better education system in his home country. These aspirations were maintained long after it was clear that life in China offered few opportunities to realize them.

The “method of hope” provides a way for the researcher to reorient knowledge production so as to better understand hopeful practices. It represents a means to take religious belief seriously without explaining away its unknowable features. Pentecostal institutions provide material optimism and promises of instant blessings in times of disruption. They have proved to thrive off the contradictions they create rather than being undermined by them. There is no reason to believe that the hardship Nigerian migrants face in China will make them abandon Pentecostal faith and practices. Rather, their struggles increase the need for performing hoped-for achievements as facts of the present.